The MNB currently only runs on the Windows platform. A macOS version is in the works, but for now if you want to run it on a Mac, you will need to install a windows emulator (e.g. Boot Camp, Parallels, Fusion).

Q2.  How do I get the Spanish protocols?

Q3.  What published articles are there on the Validity and Reliability and Sensitivity and Specificity of the MNB?

The Meyers Neuropsychological Battery (MNB) has been ongoing for more than 20 years.  The MNB was developed as a battery of tests that were both sensitive and specific to the presence of brain injury and other cognitive impairments.  These tests are able to differentiate between different neuropsychological injuries and diseases.  The tests selected for the MNB were chosen by a series of discriminant functions that identified tests that were sensitive and specific to cognitive injury and disease.  The discriminant functions were able to identify tests that could differentiate such conditions as Normal vs Traumatic Brain Injury (TBI), or ADD vs TBI, or Depression vs TBI, or ADD vs Anxiety and so forth.  Tests that were able to differentiate between these conditions were then included in the MNB.

The MNB has a statistical methods (Rohling Interpretive Method, and other statistics) used to analyze and compare the patient data with various comparison groups.  The MNB is composed of well-known neuropsychology tests.  Some tests in the MNB are parts of other test batteries, (Block Design, Similarities, Digit Span, Arithmetic, Information, Coding, Picture Completion from the Wechsler Scale (WAIS) [R, III, IV], and Category (Victoria version or Full version), Finger Tapping, and Trails A and B from the Halstead Reitan Battery (HRB).  The seven WAIS-IV subtests used in the MNB can also be used to calculate the Ward (Ward, 1990) seven subtest version of the WAIS-IV (Meyers, Zellinger, Kockler, Wagner, Miller, 2013); but the IQ number is not used in any of the MNB calculations.

Although the MNB is designed to use seven (Block Design, Similarities, Digit Span, Arithmetic, Information, Coding, Picture Completion) parts of the WAIS-IV (Meyers, Zellinger, Kockler, Wagner, Miller, 2013), the resulting estimations of IQ are not used in any of the computations, comparison groups or statistical methods.  The individual tests from the WAIS-IV are included (along with other non-WAIS tests) in the domains within the MNB.  The MNB assigns test scores to neuropsychological domains that are similar to those proposed by Larrabee (2000, 2017).  Furthermore, the MNB includes neuropsychological measures that are commonly administered by clinicians (Miller, Fichtenberg, & Millis, 2010; Meyers & Rohling, 2004).  The normative data in the MNB has also been compared to other normative samples and found to be as good or better than other normative systems (Rohling, Miller, Axelrod, Wall, Lee, Kinikini, 2015).

The purpose of the MNB is to provide an accurate, reliable and valid method of identifying cognitive impairment.  The MNB has more than 50 publications demonstrating and corroborating the tests, methods and uses of the MNB.  The MNB has been found to meet Daubert standards (Rohling, Meyers, Williams, Kalat, Williams, Keene, 2015).  The normative data in the MNB has been independently evaluated and found to be superior to other large normative data bases.  The MNB has been checked for bias in forensic use (Meyers, Reinsch-Boothby, Miller, Rohling, and Axelrod, 2011).  This study also checked for any bias in the methodology used in the MNB.  The methodology used is of such quality that the American Medical Association (AMA) has selected it as the recommended method for rating cognitive impairment and percentage of impairment from cognitive injury or disease (Barth and Meyers, 2017).

Another feature of the MNB is the built-in method for Premorbid Estimate (PE) functioning (Meyers, Miller, Rohling, Kalat, 2019).  The MNB contains a method using demographics, word reading (adapted from the NAART) and an estimate based on history.  The PE uses the Revised NAART (Meyers, et al., 2019).  These three parts are averaged to produce the Premorbid Estimate (PE) which estimates the expected patient performance on neuropsychological tests (Rohling, Langhinrichsen-Rohling, Meyers, 2020).  This is different from the Test of Premorbid Functioning (TOPF; Holdnack, Schoenberg, & Lange, 2013), which predicts IQ performance.  The TOPF is a word reading test that was adapted from the Wechsler Test of Adult Reading (WTAR; Wechsler, 2001).  The word list of the TOPF contains three words from the NAART.  The PE predicts expected neuropsychological functioning rather than IQ.  Neuropsychological functioning includes tasks that are not in IQ tests, such as memory (other than the Wechsler Memory Scale), motor, and sensory tests.  Tests like the TOPF that predict IQ will often overpredict the PE as the PE and TOPF are predicting different expectations.

The MNB also has built in validity checks which are important as the validity of the data being interpreted must be established.  There are multiple validity checks in the MNB at the individual test level, domain level, and at the global level, (Meyers, Galinsky, and Volbrecht, 1999; Meyers, Morrison, & Miller, 2001; Larrabee, Rohling, & Meyers, 2019; Hill, Rohling, Boettcher, Meyers, 2013; Meyers, 2007; Meyers, & Volbrecht, 2003; Larrabee, Rohling, & Meyers, 2019).  In all the studies, the MNB validity measures have been shown to appropriately identify invalid data sets.  In the MNB, the different validity measures used in any single case depend on the demographics, diagnosis and functional ability of the individual being assessed.  The MNB adapts to each case such that only the appropriate validity measures are used, and measures that would not be appropriate due to demographics or diagnosis, are excluded.

The MNB has been validated many times in various ways.  One of the first validity studies published was Volbrecht, Meyers, and Kaster-Bundgaard, (2000) who demonstrated that the MNB was able to discriminate TBI from cerebral vascular accidents, mental health and dementia.  Meyers & Rohling, (2004) found that the MNB was able to correctly identify normal controls, depressed, chronic pain patients and patients with mild TBI, with a 96.1% correct classification rate.  The Meyers and Rohling study also showed that the MNB has very good test-retest reliability with r=.86, at a one year later test-retest.  These results show that the MNB has good stability over time and is reliable.  The MNB was also compared with a set of HRB data and the MNB was not only found to be sensitive to the presence of brain injury but also to the degree of impairment.

The MNB also has methods to objectively match patterns of test performance.  A study by Meyers and Miller, (2021) showed that the statistical methods used in the MNB were very accurate in matching patterns of Neuropsychological data between a patient dat set and comparison groups.  The results of this study showed better than 90% correct in pattern matching.

The MNB was also validated against CT and MRI data (Meyers & Rohling, 2009), showing that the tests in the MNB assess whole brain areas.  These results also indicated that neuropsychological tests assess larger areas of the brain rather than single areas.

The MNB method has also been found to be able to identify TBI, normal, anxiety, depression and chronic pain patients (Meyers & Diep, 2000; Bianchini, Etherton, Greve, Heinly & Meyers, 2008; Meyers, 2017).  In other words, the MNB is able to identify those who have cognitive difficulties associated with pain.  This, along with the other studies mentioned, show that the MNB is able to discriminate different clinical groups.

The MNB was also subjected to validation using machine learning.  Meyers, Miller, and Tuita, (2013) found that the MNB was able to consistently and accurately identify individuals who had non-valid data, TBI, PTSD and other mental health diagnoses.  The machine learning algorithm was accurate at more than 90% in identifying individuals from these groups.  The machine learning algorithm (neural network) was so accurate that the algorithm method used by the MNB was used in training medical decision-making models (Miller, Rupp, Lee, & Meyers 2014).  The MNB model of using neural networks is also being used to train others in the use of neural networks (Miller, Rupp, Lee, & Meyers, 2014).

Larrabee, G.L., Rohling, M.L., & Meyers, J.E., (2019): Use of multiple performance and symptom validity measures: Determining the optimal per test cutoff for determination of invalidity, analysis of skew, and inter-test correlations in valid and invalid performance groups, The Clinical Neuropsychologist, DOI: 10.1080/13854046.2019.1614227

Meyers, J.E., Reinsch-Boothby, L., Miller, R., Rohling, M., & Axelrod, B., (2011).  Does the source of a forensic referral affect neuropsychological test performance on a standardized battery of tests?  The Clinical Neuropsychologist, 25, 477-487.

The MNB has over 1700 computer registrations. The MNB is used in the US, Canada, and some sites in the Caribbean, UK, Australia and New Zealand. 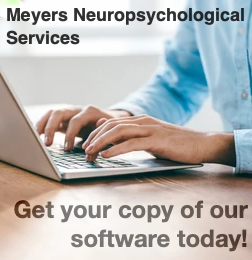 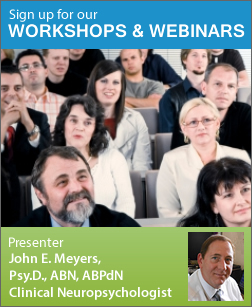 For more information about MNS or our seminars, please Contact Dr Meyers.