Using a group of patients with witnessed Loss of Consciousness-defined as time to follow commands (LOC) and hospitalization (sometimes only for a short time, sometimes for longer) this graph was prepared.  All passed the validity checks by failing no more than 1 of the 9 internal validity checks used in the MNB and were not involved in litigation.

The group labeled as Mild TBI 5 min LOC tested at 6 months or greater from time of injury and not in litigation is the black line.  This group had an Overall Test Battery Mean (OTBM) of 48.  Each group is identified by their LOC.  The thing to be aware of is the pattern of scores.  That is, the shape is the unique identifier–each pattern of scores is similar except for the elevation; therefore, assuming valid data and adequate motivation, this is what a Traumatic Brain Injury (TBI) looks like on the MNB.  The second graph shows subjects with longer LOC. 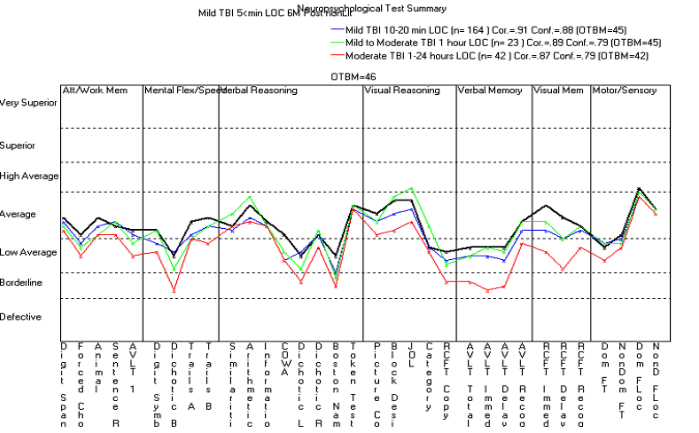 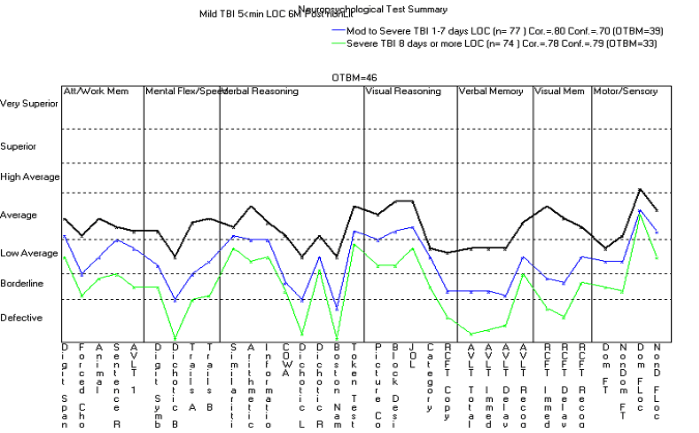 The clinician should be aware that injuries in certain areas of the brain (whatever the etiology) will have similar patterns.  The MNB contains data from more that 3000 subjects with various injuries from which the clinician can make comparisons.  The manual and computer program for the MNB contains much more detailed descriptions of various performance patterns.

The following graph shows Normals (black line, OTBM=50T), and non litigating persons who had a history of MVA with some brief confusion at the time of the accident, who passed the validity check as indicated above, and were non litigants (blue line, OTBM=50T).  The blue line group has a small number of subjects and is only presented as a reference.  You will notice that the Normals and Depressed (green line, OTBM=48T), Chronic Pain (red line, OTBM=46T) and Briefly Confused (blue line) groups are not different from each other in performance level, but each has a unique shape or pattern of results.  Meyers, J.E., & Rohling, M.L. (2004). Validation of the Meyers Short Battery on Mild TBI patients.  Archives of Clinical Neuropsychology, 19, 637-651.  We found no significant difference between Normals, Depressed and Chronic pain groups vs Mild TBI (Less that an hour of LOC). 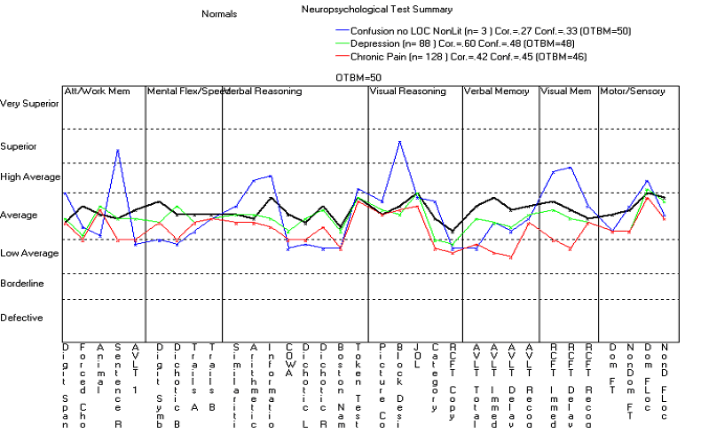